Off To Switzerland, We Go! Part 2

Five Countries In One Day

Because we were flying around in the seat of our pants, we were out on the road by 6 am, I said to Hubby, let’s do five countries in one day. He looked at me like I was mad, and said we couldn’t do it. I said, just let’s try. We were between Lausanne and Yverdon-Les-Bains.

Off we go on our quest! We head towards Basel, and there we did the cross over to France, where we had a breakfast of cheese, pate and baguette with lovely coffee. A quick jump over to Germany to Lörrach and back in Switzerland. On the outskirts of Basel, we headed over to Liechtenstein, which was a bit thrilling for me, only because I love saying Liechtenstein. 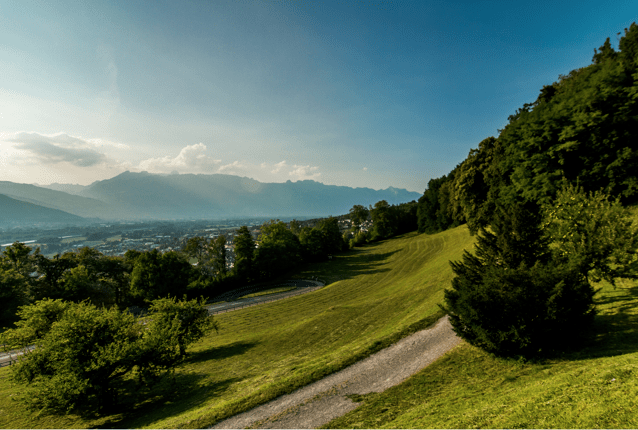 We drove over the border and into Feldkirch, Austria, which is a place I hope to explore more, as it is a stunning place. The river, the buildings are like a fairy tale. There we got a park after about fifteen minutes and found a bar cafe and soaked in the atmosphere. Hubby wanted to stay, and I said maybe later we’d come back.

Wonderful Drives around the area

We chose to head down and over the mountains into Italy to Como. I have always wanted to visit Como, and to tell the truth, it was one of the most laborious drives …only because of the scenery! I had to catch glimpses due to my being the full-time driver (Hubby has never driven), I have to catch quick glimpses or pull over where possible. My neck was killing me!
However, the views the whole way was like out of a movie, and when we got to Lake Como, it was as you would imagine with the houses, restaurants and the water. Spectacular! It now was late afternoon and drove around the lake as much as we could.
Yet when driving into Como city itself, it was hectic. Somehow, and don’t ask me how I did it, I actually drove onto this plaza where people were looking at us with horror and disgust.
What does Hubby do in this situation?
Hubby ducks down and left me to face the looks, the pointing and yelling! So as quickly as possible, I turned the car around and exited where we came in and took off before police or anyone could yell at us or slap us with a hefty fine. Hubby starts to yell at me when the coast was clear, and I just said: “was anyone killed?” He sat there, stormy for a bit. Did I mention Hubby hates to be embarrassed?
We Did it!
Five countries in one day. Hubby settles down, and we talked about finding a hotel and exploring. It was when I took a wrong turn and found ourselves a spaghetti highway, it turned out to be pure misery with traffic. People beeping and abusing us because we were either too slow (at 100km) or trying to get into a lane to turn off and no bastard would let me in! Bloody Horrible! I made the decision to go back to Switzerland.

Storms, No Rooms In The Inn and A Knockshop

By the time we got back to Switzerland, we had come into a storm that rained cats and dogs. It was so hard to see driving even with the fastest settings for the windshield wipers.

I see a motel sign and tell Hubby to go in and ask if they have any rooms to rent. Argument starts. Hubby hates to ask any motel for rooms because he thinks as soon as they hear his Irish accent, they will say no. After 10 minutes of arguing, he finally rushes out of the vehicle, to the reception and then back again. No rooms. Did I mention my Irish Hubby hates getting wet?

Be Wary of Vacancy Signs in Europe!

Back in the car, Hubby is now in a foul mood. I drive off and look for signs of motels. It is currently 10pm, and we are at a crawl with the car in this rain. GPS is not working as the rain is so hard, we cannot get a signal. We are lost somewhere, and it is very dark outside. Hubby sees a sign, and I say go on and see. He says a few choice words and jumps out of the vehicle. There is a woman on the top of stairs having a smoke. He speaks to her, and I see her nod, points to around the back car park. He jumps back in and says it’s fifty euro and I said just take it. We park in the back and run around to the front in the pouring rain.
The place is a bar in the foreground lit up with red lights and purple lights and couples are sitting at tables smoking and drinking. My spider senses are tingling.
The girl tells me it will be 50 euro and I say ok and pay. She says, don’t you want to look at the room? I assume it’s ok, I say to her. She smiles and says it’s ok in her robust and throaty accent. She leads us behind the bar and to a back stairway and exit to outside. There is this steel door, and the woman says we can get our gear through here and she will leave open but to close it when we come through.
Did I mention that my spider senses were tingling?
We get the bags, and I say to Hubby that I think this is a knocking shop. He says a what? I told him a whorehouse. He laughs and says no it’s not, it just a different hotel. I said a hotel in an industrial area? I hate it when he thinks he knows it all and yet never does he really look at situations or take in anything until its too late. I said, as I got my toiletries bag out of the car, I’m telling him that this is a knocking shop and still he wouldn’t have it.
Through the door we go, closing it, as told. As we dragged ourselves up the stairs, out of nowhere, we hear this loud moaning getting louder and louder. It was a man about to have a happy ending.
Hubby spins around to me and thunders at me, “Stop doing that!”. The moaning stops. I laughed, and I whispered that wasn’t me! He stopped and turned and looked at me. “It was you”, and I hissed to him “You just ruined a great ending for some fellow getting his rocks off!”
The look of horror on Hubby’s face was gold as he stood there for a moment, intently listening! He moved up the stairs a little quicker to our room and closed the door. We looked at our bedroom for the night; A double bed, sheets and mismatched old towels placed on the end, with small sachets of body wash.

I asked him why our room had a shower and yet no toilet? Why was there just sheets on the bed and a basket for dirty linen? Hubby looked around, and said he needed a drink.

We coyly ventured out of the room and headed downstairs. We go over to the lit corner of the bar, the music is trance-pop shite so loud that it hurts your teeth. We order drinks, and as I wait for them, I observe the place carefully.
Couples sit in faux leather booths that are tight and cosy. One girl I see, straight across from me, is rubbing her fella’s leg under the table like she was trying to make a fire. But he was having none of it. He just sat there smoking, every now and then pick up his drink, smiling when she whispered into his ear. Yet never did I see him say a word to her.
An older woman was with this big fat man, who looked like he was from Turkey or the Middle East wore large gold rings on each of his chubby fingers. He was dripping gold chains around his very thick rolled neck. His lady sat there like she was sulking, every now and then looking at him and then taking a sip of her drink.
Then there is the big, brash Arian guy, and I mean this guy is over 6 foot, cut and bulging from his arms, chest and legs. He was something out of a a very bad 80’s movie. He wore his blonde hair in a short crew cut, had tats, and dressed in tight jeans (that looked ready to burst from his thighs), black biker boots and a white singlet.
He is loud, crass, and like a bee to honey, he hones in on us. He comes over and starts talking to Hubby. He asks us where we are from and does a bit of small talk trying to see what kind of victims we could be or what our deal was. But he changes his mind when I see he keeps looking at my Hubby’s hands and knuckles. My Hubby’s hands are not pretty.
He settles himself into a chair, and I see that he has made it clear he is here for the long haul. And I think he is the girl’s pimp or protector. Arian Guy after a couple of drinks goes into a rant over immigration and how he would fix it. You really don’t want to know. Hubby just nods and gives me a look of “WTF”. I try to change the subject of living in the country, but it doesn’t matter. Arian Guy does not listen to me. They keep on drinking, and now Hubby is pissed, Arian Guy is pissed, and they had bonded when talk turned to music. The Free, Rory Gallagher, Phil Lynott.
Girls come to him with drinks all the time, and we insist on shouts. He said that is good of us, as people try to milk him. I think to myself that not in a million years would people try to take advantage of you, buster.
I am now drinking soft drinks, as I am still wary of the place and people. Biker looking dudes walk in and then straight out the back. A man comes out of the back, whom I think is “moaning guy”, goes to the front of the bar and buys a drink, throws it back and walks out.
By 3am, I finally get Hubby off his chair and tell him enough now. The Arian Guy and Hubby shake hands then hug, saying stupid drunk things. Up the stairs, I manoeuvre him to the bedroom. He falls on top of the bed, out like a light. I have to work around him to find a patch to sleep on.
By 8am, I wake, and the place is dead quiet. I get Hubby up and out of bed, who is still drunk as a skunk. I shove the bags into his arms and march him out of the building, off to find somewhere to eat.