Off To Switzerland We Go!

After the night in the brothel, which was somewhere between Lugano and Bellinzona, I headed towards Zurich. Hubby was passed out in the front seat. So I was driving blind. Somehow I had taken a wrong turn and was driving for ages, and I came to the outskirts of Thun. Driving along lovely countryside all the way, yet I was so tired. I found what looked like a cheap hotel, but still had to pay an arm and a leg for.
Hubby was surprised he missed most of the day and was glad for the bed. We got a meal and hit the hay pretty early.
The next morning we started out again, and still Hubby was not well after the massive session with the Arian Guy. Driving along a road near Lake Brienz, we headed towards a mountain range that had snow-capped peaks. The roads became twisting chicanes and Hubby complained to take it easy. The views began to be spectacular as we wound up higher and higher.
“Look! Look!” I would excitedly say as he dozed and he would sit up and take a gander and resume the position.
As I got to a point, something in my head kept saying, James Bond. Looking around, many cars were driving along this road. Some had pulled over on thin strips of gravel to jump out and take photos.
I yelled “GOLDFINGER!” and Hubby, this time jumped awake and in his WTF way like a roo caught in headlights.
“James Bond, Goldfinger, it was was filmed here!”
He was trying to get the little grey cells in his head to compute on what I was saying when not a couple of minutes later, did the sign saying precisely that was on the side of the road! I was near wetting myself with glee! I love the Bond books and some of the films. I was in my prime and Hubby was going on that I was mad. Too bad too sad I told him. This was my day!
As we wound up the mountainside, the snow was beginning to get thicker and thicker on the sides of the road, and it was summer. I was driving our car from Ireland, which is a right-hand drive, so I carefully edged close to the snow walls. Winding my window down, I reached out and grabbed a handful, and threw it in Hubby’s face! That woke him up! And you know what he’s like with water! He starts spluttering and cussing, and so I grab more snow and hit him with it again, and he starts to laughs. He’s out of his bad mood. 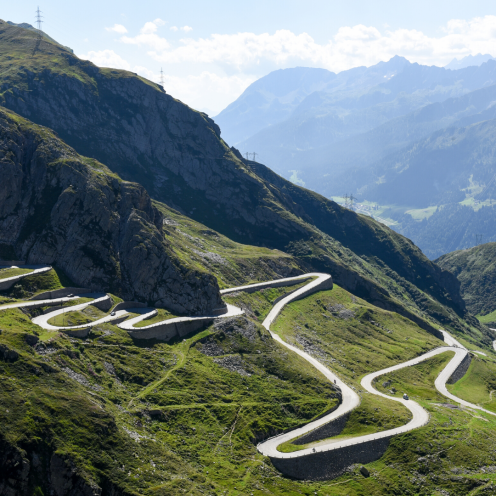 Up to the top, we went and pulled over to the view. And what a view! It was, as they say, pretty as a picture. Taking a walk around to stretch the legs, I noticed a whole heap of people in small, everyday kind of cars. Yet, they had electrical extension cords around the place, hooking into the power, taking turns and laughing and chatting. Then the two most spectacular electric motorbikes pulled up near us, and I was in love.

So while we took in the scenery, I turned and saw that some of the electric cars were getting ready to leave. I said to Hubby to get in before the rush down the mountain. So we get in, and a few cars roll out before us, and we followed. The drive down is fantastic, and the views are to die for…not literally, but they are pretty special.

Past the famous Belvedere Hotel, (which I could not stop to take a shot at), down the twisting and turning valley and it is here where our GPS would not work. So following the road and the cars in front of me, we presumed we would find a significant village or city sooner or later.

It was beginning to get into the late afternoon, and in the valley, it was much darker than it usually would be out on the flat. As we came up to this village, there is a detour sign with the little lights flashing on it. So, again, I follow the vehicle in front of me. This then led us onto an old airfield.

Every vehicle in the dim of the late afternoon was being directed to pull over. All I could see were people in hi-vis vests and clipboards bending over to the drivers in the window. So I pulled over as well.

All of a sudden, a group of kids come running up to our car. Knocking on the window, Hubby turned his window down, and bottles of water and sandwiches are being shoved into his face. He grabs some and asks the kids where were we. They are all speaking and laughing, and I yell English? Anyone English?

One kid sees we want to speak to someone and so calls over a woman with a hi-vis vest and a clipboard in hand. She walks over, and I wind down the window, and before I can say a word the woman says in her best English but with a very Germanic accent,

“You must drive over to section B and wait. There you will have to go around the cones in a figure of eight twice in the fastest time. Then you must meet at the end with the other cars.“

I stared at her. Then I look over to the runway where cones and cars were driving around them. I start to giggle but have to hold it in.

“WE…” pointing to myself and Hubby and speaking a little louder for some reason,

“ARE LOST!” I couldn’t think of anything to mime for lost, but emphasised it, hoping she understood.

“Can YOU” Pointing at her

“Help US?” Pointing back at myself and Hubby again.

I am trying to be serious, but I can’t stop giggling.

She looks at me, and I could see she could not understand what I was telling her. So she piped up again;

“You must drive over to section B and wait. There you will have to go around the cones in a figure of eight twice. Then you must meet at the end with the other cars.“

I start laughing, and I mean hysterically. I moved up the line.

I see another person with the hi-vis on. I call her over, and so I begin to tell her that we are LOST! She looked blankly at me at first, taking in what I am saying to her. Then she starts to laugh.

“You are not in the rally?”

“No,” I tell her with tears in my eyes and smiling.

“We are Lost!” I start laughing.

We both burst out laughing, and she is bent over, and I am crying on the steering wheel. Hubby is telling me to settle down. He still hasn’t got a gist on the situation and has not taken in the surroundings or why free sandwiches or water were given to us.

Through gasps of breath, the woman points down the runway and says there is a main road.

“Auf Wiedersehen” I waved, laughing, as we took off.

Hubby looks at me and says,

“What did she mean by rally?”

The penny dropped, and the hysterics kicked in. I had not laughed so hard in ages like that, I swear. I near peed myself so many times, and it was hard to drive because every time we looked at each other or took a bite of our free sandwiches, we started again!